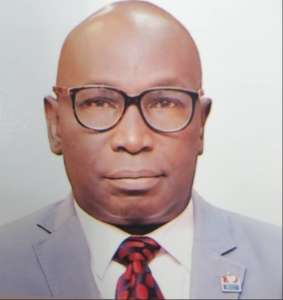 A 1985 University of Calabar graduate of Theatre Arts, Olusina Thorpe also obtained a Postgraduate Diploma in Public Relations from the Nigerian Institute of Journalism in 1993.

He started his work career in the teaching profession as a Lagos State Secondary School teacher, serving for over seven years before transferring his services to the Lagos State Civil Service in 1995.

Upon employment as an Information Officer in 1995, he was deployed to head the Badagry Divisional Information Office where he diligently and successfully coordinated the information management activities at the grassroots. During the same period, he piloted the Miss Badagry segment of the Miss Lagos Show in 1996.

His sojourn as a Public Relations Officer (now re-christened Public Affairs Officer) has taken him to various Ministries, Departments and Agencies of the Lagos State Government.

While at the Transportation Ministry between year 1996 and 2000, he developed and implemented communication strategies to support and propagate the government’s initiatives and vision to introduce modern means of transportation such as the Bus Rapid Transport (BRT) Line and the Lagos Bus Services (LAGBUS). He was also part of the team that birthed the Lagos State Traffic Management Authority (LASTMA) among other initiatives.

As an Information Officer in the Ministry of The Environment and Physical Planning where he served from 2000 to 2005, he also contributed to initiatives such as the Kick Against Indiscipline (KAI) and the enhancement of the activities of Lagos State Waste Management Agency (LAWMA); both establishments were at the time and are still part of the “Environment Family”.

In July 2019, he was appointed as Director, Public Affairs department of the Ministry of Information and Strategy to assume a supervisory role for all Public Affairs Officers within the employment of the Lagos State Civil Service. Since assumption of duties, he has expanded the frontiers of news disseminated about the Lagos State across all print and electronic channels owned by government as well as private media.

A devout Christian of the Methodist denomination, Olusina Thorpe is a member of the Nigerian Union of Journalism, serving as Chairman, Ministry of Information Chapel during his early years in the Civil Service.

Born in the Idumagbo area of Lagos Island to the Thorpe and Sogunro Chieftaincy Family, he has also been an active member of the Nigerian Institute of Public Relations since 1995.

He is married to Ibironke, blessed with three lovely kids and loves reading, music and adventure.